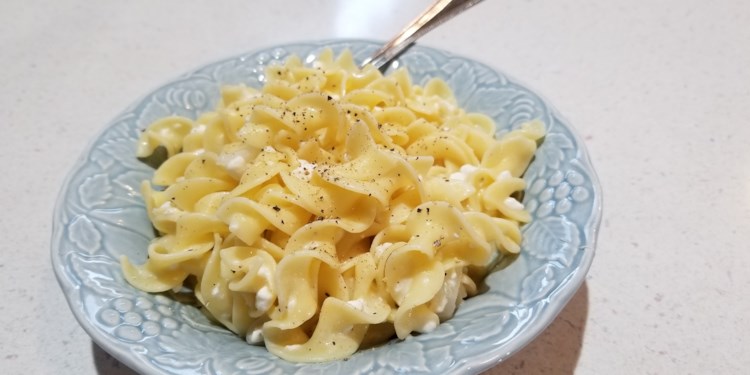 "This simple recipe came from the Polish side of my family. We simply called it 'cottage cheese and noodles' or 'lazy man pierogies.' It's a great comfort food and can be made with any kind of noodle. It could be a side dish, but we always enjoyed it as a meal." 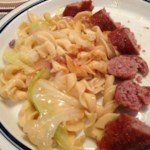 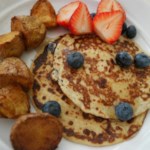 It was a super easy, quick dish that tasted fantastic. I have it twice. The first time with egg noodles, and the second time I took another reviwer's suggestion and made it with wagon wheel noodles, which was the only pasta I had in the pantry at the time. Both ways turned out great. This is also a very kid friendly dish and is a nice alternative to the typical mac and cheese, which I can get burned out on.

This recipe does not have to be made with egg noodles. Rigatoni, shells, even wagon wheel noodles are all equally delicious with it. I use whatever I have on hand. This dish is also yummy leftover, but some of the cottage cheese will soak or melt into the noodles so I like to add an additional scoop of cottage cheese in when I reheat the leftovers.

When I was a little girl, my (full-blooded Italian!) aunt introduced me to spaghetti w/ cottage cheese. I think that's all she put in it too; literally, pasta & cottage cheese (with a splash of the pasta water.) Years later, when I had a child of my own, I started making this for her (now adding butter/onion to give it more flavor.) Both ways -- just pasta/cottage cheese -- and then with the butter/onion -- were awesome (...but anything with some butta' is betta', ya know??) I forgot ALL about this "dish" then til recently when I was trying to use up leftover sour cream from Thanksgiving. And after doing a "google search" for ingredients, I fell upon this recipe ... making it yet again (now for TWO kids) :) - & with the sour cream this time, too. Wow! Loved it even MORE (and didn't think that was possible?!) I mean, you can't go wrong with the simple, basic versions -- but that blob of sour cream really adds somethin'. It helped everything come together as a 'sauce' almost, instead of just cheese curds & noodles. (I think this is what kept the picky-eatin' kid from realizing this was anything BUT "white mac 'n cheese." I know, I know ... it was a stretch, but he's 5 so he bought it). Yes! Win-win! Try it! I'm serious! It's not just for "cottage cheese-eaters." When warmed up ... and with the other ingredients ... the C.C. loses the texture/viscosity & appearance that some people can't seem to get into. I can see why "Lazy Man's Pierogies" are a great title for this one!

I loved this recipe! I only made a couple changes. I added some garlic when I was sauteeing the onion. Then, because my pasta wasn't done yet, I thought I would add my cottage cheese to the onion in the skillet just to heat it up. Then, to my surprise, the cottage cheese melted into a smooth, creamy, cheesy sauce. Yum! I can't wait to try this again and add some sharp cheddar to make it more like macaroni and cheese and see what that's like. I also love the nutrition you get from all the protein in the cottage cheese! This is a keeper!

Made this for lunch today and I must say, I like this so much better than mac and cheese! I just loved, loved, loved the flavor from the onion. It was one of the easiest recipes to make and made more than enough (I have leftovers so I have lunches for a couples of days.)

My mom showed me how to make this years ago. But we do not use sour cream, or cottage cheese. We use Cream cheese and butter no onion either. Try this one, you just might like it.

Delicious and super duper simple! I loved the flvor you got from the sauteed onions and the sour cream almost forms a light sauce over the noodles. This was great leftover, but I did add an additional scoop of cottage cheese into the mixture when I reheated it because a lot of it had soaked into the noodles after 2 days in the fridge (but the flavor was awesome after sitting in the fridge.)

I'm so GLAD you posted this, it was my favorite dish growing up....I always assumed it had it's roots in Polish heritage because all my grandparents migrated over, but I wasn't sure..... My mom made it without the sour cream. Next time I make the dish, I'll have to try adding it. There's nothing like this recipe to bring back fond memories of my childhood, or giving myself a hug and imagining my mom and dad were still here. 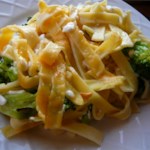 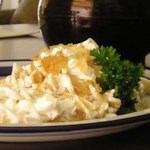