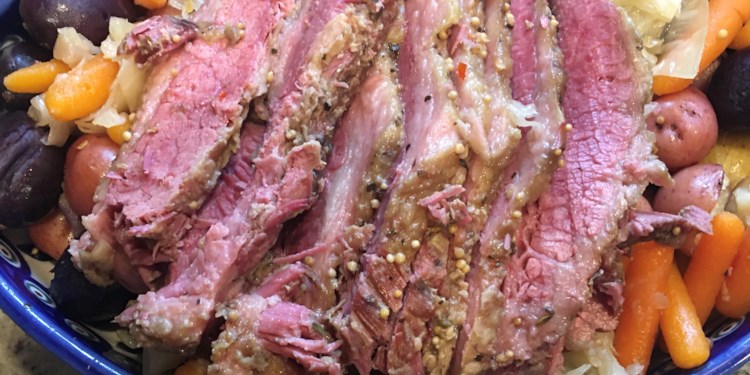 "Corned beef used to be a weekend only treat for me due to how long it took to cook, until I discovered the Instant Pot®. Save yourself time and hassle by letting your Instant Pot® do all of the work for you, and in a fraction of the time. You can have it and all of the fixings on your table in 2 hours. If you decide to fix cabbage, be sure to keep it in large wedges so that it does not overcook." 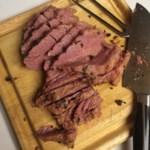 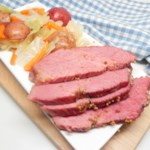 If you'd like to do a complete Irish feast, remove the trivet while your brisket is resting and place baby carrots, quartered red potatoes, and cabbage wedges in the bottom of the Instant Pot. Secure the lid, lock, seal, and select the manual setting. Set for 5 minutes. Do a quick release. The rested brisket and vegetables are ready at the same time.

Fantastic! I had previously tried making a corned beef in my Instant Pot with terrible results - tough and dry and a trip to the trash. I decided to try again using this recipe and it was PERFECT! Juicy, tender....cannot...stop....eating....it! This is how I'll be making my corned beef from now on! UPDATE: I have made this at least half a dozen times since and it's perfection every time, whether using the point or flat cut.

The reason it's turning out dry for some people is they're cooking it too long. I used a 2.9lb cut of corned beef and I cooked it on top of the raised metal insert thing for 60 minutes, then let it natural release for 14 minutes, then I manually let the rest of the pressure out slowly. I had 2 cups of water in there along with a 12oz bottle of Guinness, pickling spice, & garlic. The meat was cooked perfectly, 170° very tender. Then I followed Nicole's recommendation and took the meat out, strained the liquid, then added baby carrots and brussel sprouts (cuz i didn't feel like doing cabbage) with some salt and pepper. I set the meat on top of the carrots/brussel sprouts and added in about an inch deep of the strained liquid, and cooked it for 5 more minutes. The brussel sprouts weren't soft yet so after that I took the meat out & sliced it, and cooked the sprouts/carrots by themselves in the liquid for another 5 minutes. I think I had too much liquid in there at the end that's why it took longer to cook the brussel sprouts. Anyway it turned out epic, I would say cook the meat for 20 minutes per pound, and then let it natural release for 10-15 minutes depending on the weight of the meat

This is very very dry. I found 90 minutes much too long. I'm going to try again at 45 and see how that turns out. Just as in boiling, if its too long it just turns hard. Unfortunately you don't have the luxury of checking on the process with an instant pot. I'll let you know how it turned out with 45 min.

This was delicious!! The whole family gave it rave reviews. I followed a suggestion of cooking cabbage and potatoes and carrots while the meat rested. Perfect accompaniment. The only problem was I should have bought a larger brisket! The broth was so delicious I used it to make vegetable sup with the leftover veggies. I added a can of diced tomatoes and drained white beans, a bit of Italian seasoning and fresh ground pepper. This will become a St. Patrick’s Day traditional meal!

Made this today, only thing added was I trimmed most of the fat cap off, fat side down, light coating of mustard to hold spice packet contents in place and a light dusting of brown sugar. For beer, I used Hackerphschorr Oktoberfest beer. O M G The Best Corned Beef we have ever had and we make Corned Beef a lot in this home. Now I know why I have this InstaPot! Wow, Wow, Wow!

This is probably the best corned beef I’ve ever had. I used hard cider instead of beer (it’s what I had, and I don’t like beer anyway) and it was absolutely delicious. So tender and flavorful! And very easy in the instant pot.

Hands down the easiest I've made. I made it exactly to the recipe with a Guinness and didn't find anything out of balance. I rinsed the meat before placing on the trivet just to get the salt solution off. While it rested I did one head of cabbage cut into 6 wedges, about 5 carrots, a bag of parsnips (both coarsely chopped), and a whole bag of baby red potatoes un cut in the cooking liquid for 5 min on high from another review. Everything turned out perfect. Next year I'll brine my own again but I will definitely cook it this way.

This is one of the best meals I’ve ever made in my Instant Pot. I added a sliced onion to the broth, but other than that I made it as specified. Mine turned out like deli corned beef with a subtle hint of beer... not at all stringy like in some of the pictures. I’ll be making this again. Try it — you won’t be disappointed! 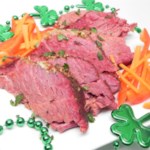 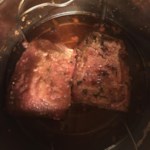